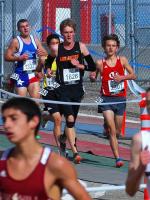 Morgantown Girls & University Boys Speed Away At Knight...
The Morgantown girls and University boys proved to have the best squads in the season opening Knight Night Relays at Preston High School in Kingwood on Saturday night in the 4x1.5 mile relay race....