Loading
Fans of West Virginia High School Track & Field are still in awe of the spectacular record breaking performances at this year's State Meet. It was like watching New York's Fourth of July firework's which is impressive, enormous, colorful, and in-your-face. The record-breaking weekend was more than fans could have anticipated, but it was the grand finale that had many wondering if this State Meet will ever be topped when not one, nor two, but three athletes turned in 40-point performances by winning a total of four individual events apiece. Never has a State Meet produced this many perfect scores. These three performances added to the previous seven, which raised the total to only ten in it's 98th Boys/38th Girls State Meet history. Yes, you heard me right! There were only seven 40-pointer performances up to this point. This year's meet alone has now produced about one-third of the 40-point performances.
I remember talking to Pat Riley of TriStateRacer at the beginning of the track season about the amazing indoor performances. We both agreed that the mild winter that we had allowed athletes to prepare early for this outdoor track season. Pat said, "This is going to be a record breaking year with some amazing times. I can't wait!" Boy, did he ever get that one right! There was a total of twenty-five meet records set during the two day event.
The three athletes who turned in the 40-point performances and earned high point honors were Brandon Franklin, Emily Godwin, and Bria Welker. 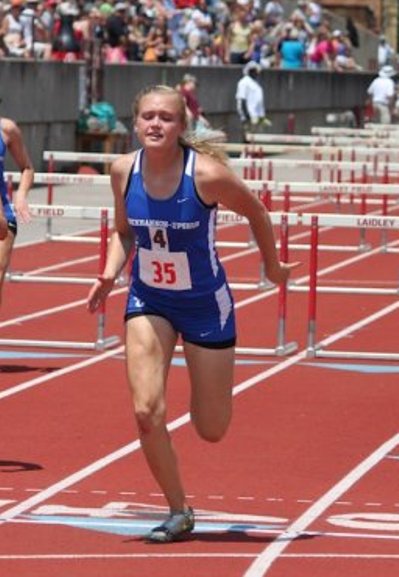 Emily Godwin - Lance McDaniel Photo
In Class AAA Girls, Junior Emily Godwin of Buckhannon-Upshur High School in Buckhannon, WV ran a 14.67 in the 100 Meter High Hurdles, ran a PR of 43.96 in the 300 Meter Low Hurdles (meet record), went 5-8 in the High Jump, and went 17-10.5 in the Long Jump, placing first in all four individual events. Emily is coached by Jackie Zuliani. 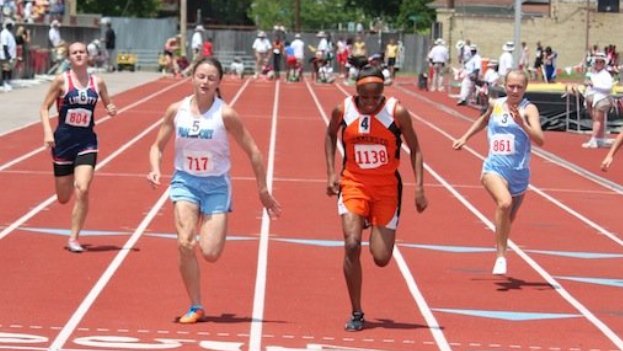 Bria Welker winning the 200m - Lance McDaniel Photo
WV Runners would like to congratulate these three outstanding athletes on their 40-point performances!
Tweets by