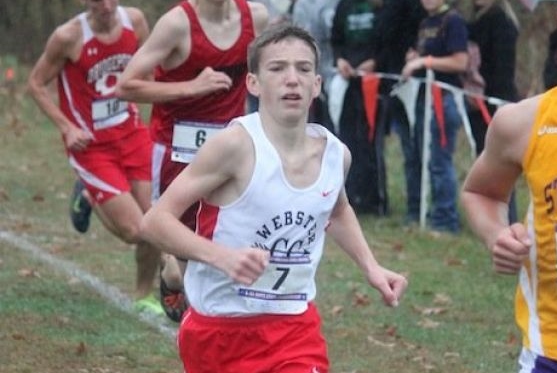 This is the eighth in a series of previews on West Virginia High School boys’ and girls’ cross country for the 2013 season.

Brettley Harris, a junior at Webster County High School, is the pre-season WV#6 and the Class AA/A boys #2 ranked runner. He had an outstanding sophomore cross country season.

Where did you go to middle school?

I started track in the sixth grade and cross country in the eighth grade.

I'm proud of my race at last year's state cross country meet where I ran a 16:22 and got sixth place.

What are your goals for you and your team this XC season?

I plan on going for top three at states. As for our team, we are focusing on winning conference, and then going forward after that.

After the regular XC season is over, will you take part in any of the national races like Foot Locker Championships or the Nike XC race?

I don't know if I will be able to afford to do Foot Locker or Nike, but I will be doing some indoor track meets for sure.

Yes, I would like to go run college at WV Wesleyan.

My coach, Steven Nutter, is definitely the most influential person in my running career and in my life.

Brettley Harris made a significant cross country improvement from freshman to sophomore seasons. He improved from 30th to sixth while taking more than a minute and 56 seconds off his time. Harris looks to build upon last year’s success by placing in the top three. This year’s West Virginia High School Class AA/A Boys Cross Country Championship is shaping up to be a three-way battle between Johnny Hogue of Ritchie County HS (Class AA/A #1), Brettley Harris of Webster County HS (Class AA/A #2) and Abraham Merinar of Bridgeport Senior HS (Class AA/A #3).  At last year’s state meet, Hogue beat Harris by only 11 seconds, while Harris only beat Merinar by eight seconds.

Harris shouldn’t become complacent after last year’s success. There are three runners that could easily challenge for the top three spots: Scott Nesland, a senior at Philip Barbour HS, Jason Weitzel, a junior at PikeView HS, and Glenn McMillan, a junior at Wirt County HS.

Will Brettley Harris build upon last year’s success in cross country? Can some up-and-coming talent steal one of the top three spots at the AA/A Boys West Virginia State XC Meet?