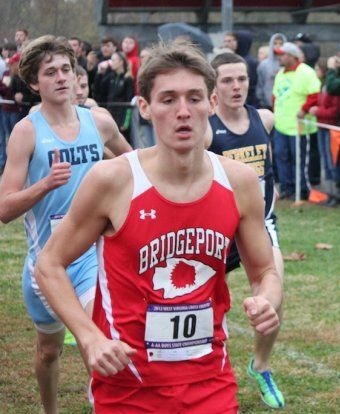 This is the fifth in a series of previews on West Virginia High School boys’ and girls’ cross country for the 2013 season.

Abraham Merinar, a senior at Bridgeport Senior High School, is the pre-season WV#8 ranked cross country runner for all classes and is currently ranked #3 for AA/A boys. He was All-State First Team in both cross country and track in 2012-13.

As a youngster, Abe Merinar participated in track, cross country, wrestling, basketball, soccer and baseball. He started running in sixth grade at Bridgeport Middle School in Bridgeport, WV. The one race that Merinar is most proud of was at this year’s West Virginia State Track & Field Championship, when he won the AA boys 1600 in a new personal record time. His goals for the remainder of his high school career are to win five more individual state championships and for his team to win the cross country team championship. After the regular XC season is over, Abe will probably run Foot Locker but might do Nike Cross instead, depending a lot on how he does at the WV state meet and the Great American Cross Country Festival at Cary, NC. Merinar plans to run in college but is still undecided. When asked who the most influential person was in his running career, Merinar replied, “Scott Jurek.”

Abe Merinar would like to become the first runner from Bridgeport Senior High School to win an individual boys cross country state championship. Much of Merinar’s success is going to depend upon his consistency. He has proven that he has the athletic ability to win a title, but he must develop a winning attitude. When he toes the line against the competition, he should expect to win. You have to believe in yourself and your abilities. After watching him at this year’s West Virginia State Track & Field Championship, I see his maturity growing. For this senior, now is the time to show he came to compete week after week.

Merinar attended the Smoky Mountain Running Camp in Asheville, NC, over the summer. The camp may be responsible for the progress he makes as an athlete. I look for Abe to have excellent cross country and track seasons.

Can Abe Merinar climb to the top in the 2013 West Virginia AA/A Boys Individual Cross Country Rankings? Will the challenge to be better help him become the first runner from Bridgeport Senior High School to win an individual boys cross country state championship?