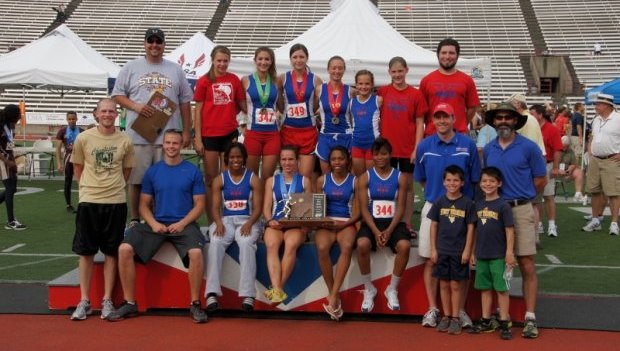 Going into the West Virginia High School Track & Field State Tournament, which was held on May 18th-19th at Charleston Laidley Field, the Buckhannon-Upshur girls' track team were looking for a third straight team team championship.
Head Coach Jackie Zuliani knew she had a very talented and athletic squad, which was led by Emily Godwin, one of West Virginia's best female prep athletes of all time. Godwin was the Class AAA Girls high point winner at last year's State Meet with thirty-six points.
The Lady Bucs had an outstanding regular and Regional track season, but were nervous about going into this year's State Track Meet.
B-U knew that the Morgantown girls' track team were also having a great track season and that the margin of error was slim. What made this match-up interesting was the fact that they would only square off in five events - the 4x200 meter relay, high jump, pole vault, long jump, and shot put. Neither team could do much damage, it would be up to how they fared against the rest of the competition.
Morgantown's Coach Steve Blinco said at the beginning of the track season that he felt people were counting his team out. Blinco knew in his heart that the Mohigans would be in the hunt for the Team Championship. "We have a lot of young talent, but just don't count us out!" said Blinco.
After day one was completed, with only five events being scored, Morgantown led Buckhannon-Upshur thirty-two to nineteen in the team standings.
At the completion of 2012 West State Track Meet, the Morgantown High School girls' track team won four events and the team title by a score of 85 to 75. The Mohigans received first from Brynn Harshbarger in the 3200 meter run and Rachel Hewitt in the pole vault. Morgantown also won the 4x100 & 4x200 meter relay of (Ashley Halloway, Haley Halloway, Natasha Trott, Knisha Baldwin).
Other Morgantown girls' track team notables: Natasha Trott placed second in the 100 & 200 meter run, Brynn Harshbarger placed third in the 1600 meter run, Sydney Pineault placed fourth in the 3200 meter run, the 4x800 meter relay team placed second, Rebekah Lafata placed fifth in the long jump, and Haley Halloway placed third in the high jump.