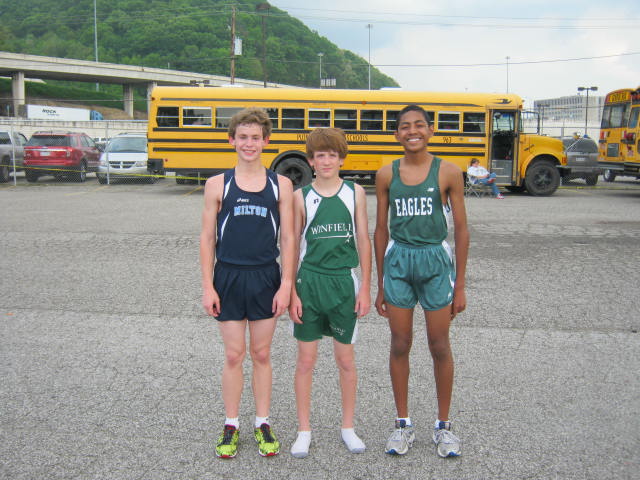 The weather conditions were chilly, windy, and with some occasional rain. It wasn’t a perfect day to set a meet record or run fast times. In fact, there was still water on the track from afternoon rain falls. One would have thought that this race would have been more tactical, but that would have meant that Thomas would have to run something that he’s not accustomed too.

“Last call for the 3200-meter run,” announces the starter as the top ranked field toed the starting line to see who West Virginia’s best middle school distance runner is. When the gun fired, Thomas shot off the line. His race plan was the same as always: get out fast and lead from start to finish. Thomas had an early lead of about fifteen meters, while Short and McMillion went out in a more conservative pace. Thomas came through 400-meters in about seventy seconds, while Short and McMillion came through in seventy-three seconds. Thomas maintained his lead at the 1600-meter mark in a time of 5:08, while Short and McMillion chipped away lap by lap coming through in 5:10. On lap six, Short made a strong surge to catch Thomas; Samuel tried to counter with a surge, but Short was just too strong.

As the pistol fires on the final lap, Andrew Short opened up a sizable lead, while McMillion was breathing right down the neck of Thomas. “I felt Braxton coming up behind me. I just tried to hold him off.” Andrew Short sprinted to the finish line to take the win in 10:28.33, while Thomas held off McMillion for second in 10:35.13, and McMillion placed third in 10:39.44. All three runners went under the meet record of 10:59.76, which was previously held by Samuel Thomas.

In the 1600-meter run,  Andrew Short placed first in 4:59.40 (New Meet Record), Jon Sandy of Teays Valley Christian School placed second in 5:03.55, Braxton McMillion placed a close third in 5:04.00, and Samuel Thomas placed fourth in 5:06.87. Thomas got boxed in at the start of the race, once he found an opening he surged to the front of the field. Thomas and Short exchanged multiple surges, which caused Thomas to have dead legs and fade late in the race.

In the 800-meter run, Nick Salmons of Barboursville Middle ran the fastest time in the state for middle school in a time of 2:13.55. Salmons held the lead from start to finish. Andrew Short was second in 2:19.51, and Eric Johns of Winfield Middle was third in 2:13.55. All three runners went under the meet record of 2:20.13, which was previously held by Preston Sheldon of Winfield Middle School in 2008.

Great job to these young men! We can’t wait to see what the future holds for these middle school runners in the long-term.