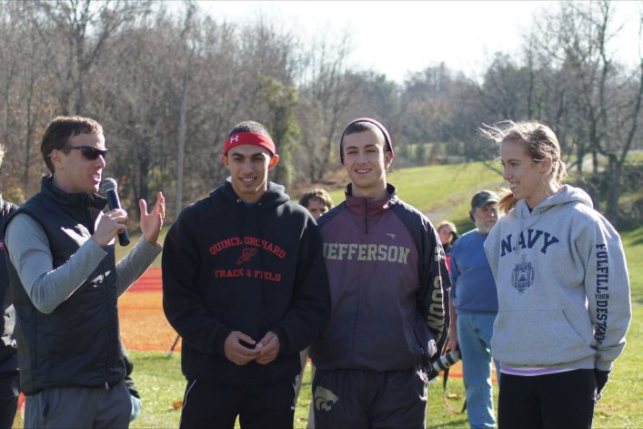 Running on a tough and hilly Smokey Glen Farms 5K course, Eric Graf broke away from the field after the 2 mile mark and never looked back to notch the victory at the sixth annual Battle of the Potomac in Gaithersburg, Maryland yesterday.   Brandon Doughty had won this race last year in 16:42 and the question of the day was whether a runner from the outmanned West Virginia team could overcome the odds and again take first place.  Graf answered that question decisively, powering away from the field to win by 17 seconds with a time of 16:28.  It was a clear cut victory made sweeter by the presence of U.S. mile record holder Alan Webb at the finish.  Webb held the finish line tape as Graf broke through for the victory and later chatted with Graf about his accomplishment.

In the Boys team competition, Maryland, led by Evan Laratta’s 3rd place finish (16:49) took the crown, scoring 115 points to Virginia’s 151 points with each team’s top ten finisher’s counting towards the overall score.  Maryland placed five runners in the top ten and 10 in the top twenty to secure the win and claim the Potomac Cup.  Second place Virginia was paced by Louis Colson’s second place finish with a time of 16:45.  Outnumbered West Virginia, with only 14 runners entered in the race, finished third with 199 points.

In the Girl’s Seeded competition, Kaitlyn Workman finished sixth to claim the top West Virginia finisher’s spot.  Workman, who runs for Preston during the season, passed two runners in the last mile and finished in 20:35.  Whitney Workman earned the second top twenty finish of the day with an 18th place finish in 22:02.  State qualifier Vivian Ruiz of Washington just missed a top 20 finish, taking 21st with a time of 22:10.

Kaitlyn Workman surges at the start

Virginia used a steady series of strong performances from their athletes to capture the girl’s Potomac Cup title, scoring 89 points to Maryland’s 121.   Virginia was led by Bailey Kolonich who burst to the front of the field between the first and second mile to win by 20 seconds in 19:56.  Second place Maryland was led by Charde Barnes who nipped fellow Marylander Abbey Daley as both girls posted identical times of 20:16.   West Virginia did not have the 10 runners entered necessary to post a team score.

In other races, Andrea Petit of Morgantown posted the best West Virginia finish of the day in the Girl’s Open race finishing fourth in 21:32.  Joining Petit in the top 20 were Anya Wallace of Jefferson (12th; 22:33) and Rachelle Rigby (14th; 22:36).  In the Boy’s Open race, Shane Rigsby of Musselman was the top West Virginia runner finishing 11th in 18:51.

Middle Schoolers also have a chance to compete at the Battle of the Potomac.  Collin Hayes brought home the top West Virginia finish in the 2.5 K race with a 13th place finish in 10:55.  Sydney Rigsby finished in 12:22, could for 8th place and the top girls Middle School finish.