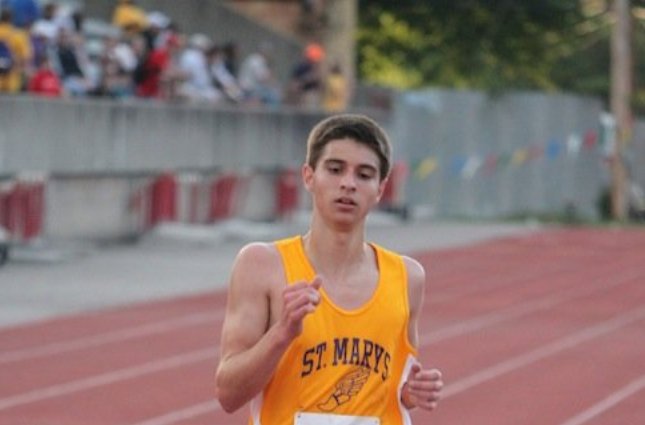 Charlie Drazba of St. Marys is accustomed to taking 2nd seat to the other famous Drazba named Maggie.  However, in his own right Charlie, a senior,  is a very accomplished runner and led his team to a narrow 6 point victory over Doddridge County by taking individual honors in 17:43 on the 5K course at the Little Kanawha Conference (LKC) Championship held at Cokely Camp Ground hosted by Ritchie County High School.

Johnnie Hogue of Ritchie County placed 2nd 10 seconds back in 17:53. Placing 3rd was Drazba’s teammate  Jordan Whitehair in 18:08. Caleb Moore of Doddridge County finished 4th in 18:22 to lead his team to runner-up claims.

Doddridge County made it an interesting meet as the bulldogs placed 3 runners in the top 10 and only trailed St. Marys by 1 point after each team had 4 runners to cross the finish line. Dylan Hupp of St. Marys was able to defeat his counterpart from Doddridge County by placing 20th in 19:35 to seal the victory.

On the ladies side, everything went as planned as Maggie Drazba scorched the field by almost 3 minutes with a personal best time of 18:29 and only 4 seconds off the WV#1 time of the year set by Sami Harris of Charleston Catholic. One had time to have a potty break and get a hot dog all the way, before the field came to the finish area.