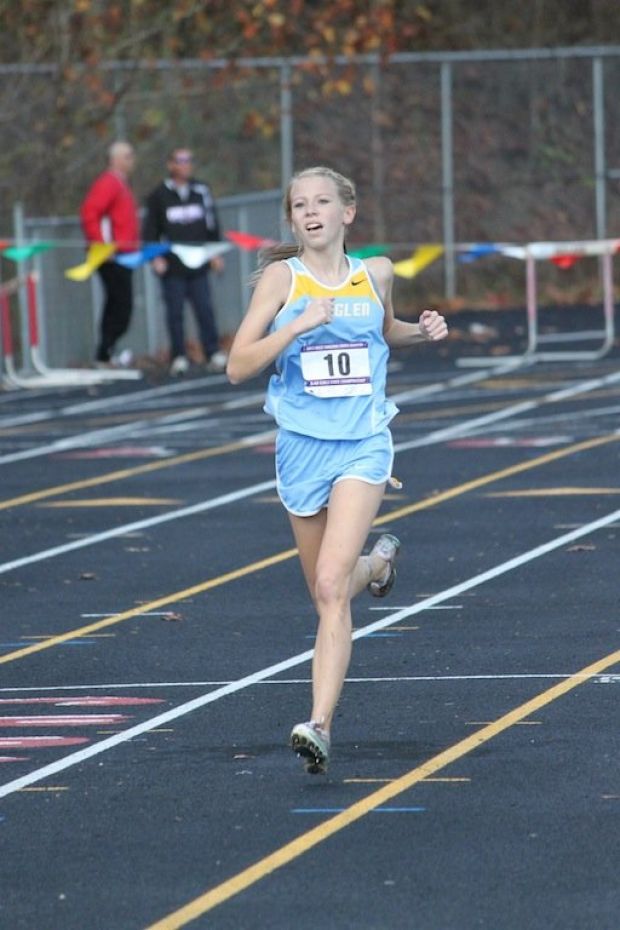 This is the ninth in a series of previews on West Virginia High School boys’ and girls’ cross country for the 2013 season.

Kelsey Chambers, a senior at Oak Glen High School, is the pre-season WV#14 and #1 Class AA/A Girl ranked runner. She looks to build upon her junior year in cross country and track.

I started track in 7th grade and cross country as a freshman.

I played soccer in elementary school.

My sophomore year of XC at the state meet. It was when I got All-State, and it was a life changing day for me because it made me realize how much potential I had, and it encouraged me to work even harder.

What are your goals for you and your team this XC season? After the regular XC season is over, will you take part in any Foot Locker Championships or the Nike XC race?

I have many goals for myself this season, but my biggest ones would be to break 19 minutes and to win XC states as an individual. It’s been a dream of mine to win states since my freshman year. Our big team goals for the season would be to get 1st or Runner-Up at Regionals and advance to the state meet, then hopefully go for top 6 as a team there. I will most likely be going to Foot Locker again this year and possibly run the elite race, depending on how the season goes.

Definitely my coach, Adam Howell, because he has pushed me to every one of my goals and never stopped believing in me. I wouldn’t be where I am today without him.

At last year’s West Virginia High School AA/A Girls Cross Country State Championship, Kelsey Chambers got an injury in the middle of the state meet race. It was about 1.5 to 1.8 miles into the race when she fell and had to drop out. Kelsey had been running in fourth place and looked to be a top 10 finisher up until that point. Chambers' goal is to come back with a bang and win her first individual AA/A girls cross country state championship.

Despite Chambers' temporary setback, she can bounce back to greater heights than before. I am reminded of a quote that I used to tell my runners: “A winner isn’t someone who falls down the least, but the one who picks himself or herself up one more time than the competition.”

Will Kelsey Chambers win her first individual AA/A girls cross country title? Will she prove that she deserves her pre-season ranking?