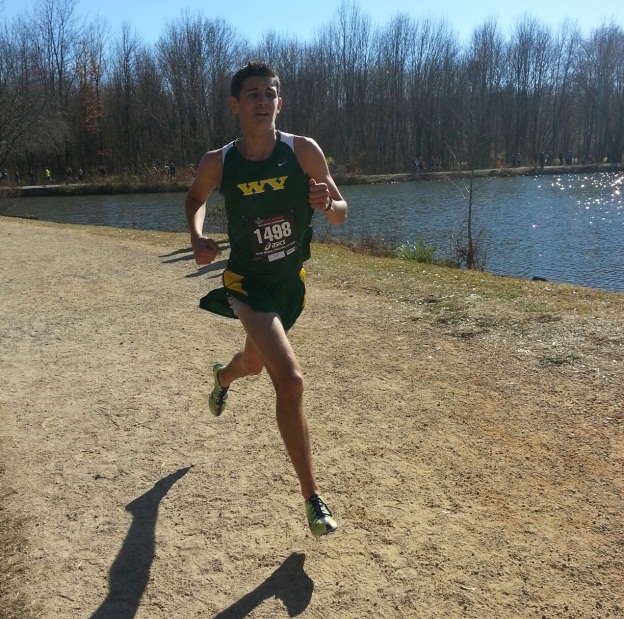 This is the sixth in a series of previews on West Virginia High School boys’ and girls’ cross country for the 2013 season.

Andrew Milliron, a senior at Jefferson High School, is the pre-season WV#2 ranked runner for AAA boys. He had outstanding cross country and track seasons as a junior.

Andrew Milliron started running track in sixth grade and cross country in eighth grade at Wildwood Middle School in Shenandoah Junction, WV. His parents didn’t want him to run cross country in sixth and seventh because he played other sports, and they didn’t want him to get an injury by doing too much. He also played soccer and basketball and was in the school band. His favorite workouts are crazy 8’s and 4-5 mile repeats.  Andrew says that he has always loved running since kindergarten. He confesses that he slightly leans more toward track than cross country. “I have always loved the adrenaline of track, but I love how we run as a group in cross country. We are more like a family. I also feel that I excel more at the 1,600 meter run,” says Milliron. He is most proud of this year’s West Virginia Track & Field Championship at Laidley Field, WV, where he got to challenge Jacob Burcham of Cabell Midland High School for the 1,600 title. Though he didn’t win, he hung with Burcham for 900 meters, which helped Andrew run a PR of 4:17.86. Milliron’s goals are for his team to win states, and he would like to run 15:10 by the end of November. When asked what his team’s chances were, he replied, “We have a good shot at winning states. We have a younger team, but they are very talented.” After the West Virginia State Cross Country Meet, he plans on running the Battle of the Potomac/Border Wars at Gaithersburg, MD, and then run the Foot Locker South Regional Cross Country Championship at McAlpine Greenway Park in Charlotte, NC. I asked Andrew who was the most influential person in his running career. “Definitely my parents. They are great motivators.” Andrew is planning on running in college for either a D1 or D2 school. It will all depend on money where he goes, because he is wanting to get a degree in Aerospace engineering. “I would love it out west, west of the Mississippi,” says Milliron.

Can Andrew Milliron, an 800- to 1,600-meter specialist, defeat Matthew Brafford, a senior at George Washington HS who is a 3,200- to 5,000-meter specialist, for the Individual AAA Boys Cross Country Championship? Or will he help lead his team to another team championship like their 2011 cross country season?