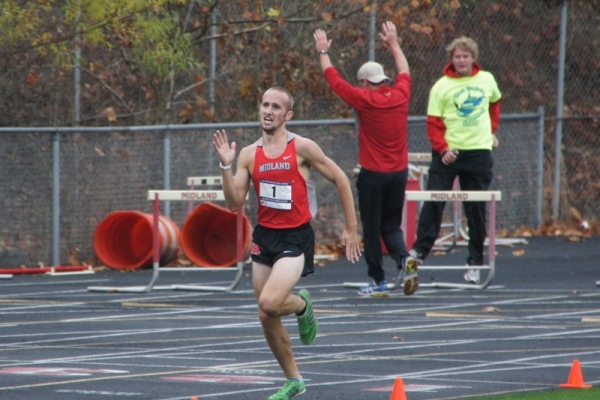 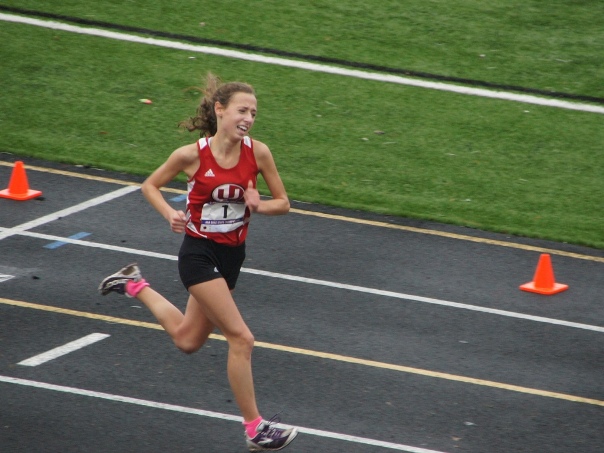 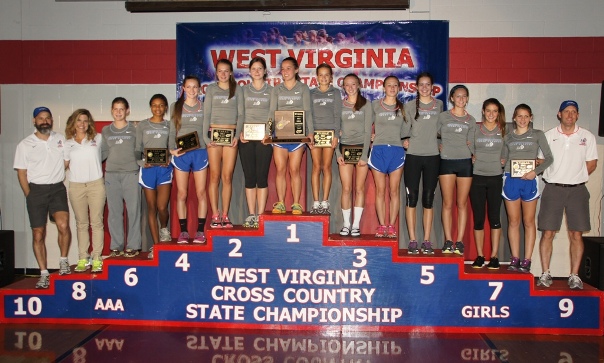 Second place University was led by junior Amelia Paladino who raced ahead of the field to break the 18 minute barrier with a time of 17:47.32.  Paladino’s time easily earned her the individual AAA girls’ crown and set a new girls’ AAA state record.   Paladino was the second girl on the day to break the 18 minute mark as Maggie Drazba of St. Mary’s ran a superlative 17:17.89 to win the A/AA championship earlier in the day.   Joining Paladino in the top 10 was Abbey Harrison who finished third in a superb 18:45.52.   Freshman Sarah Wills provided key support to the team by finishing 17th with a time of 19:48.39.  Rounding out University’s top five finishers were Katherine Warner (36th; 20:51.11) and Sydney Dotson (21:02.11).  University finished with 90 points.

Other schools also contributed to the top ten All-State podium.  Preston’s Kaitlyn Workman ran yet another strong race to finish 4th and was the last runner to break 19 minutes on the day with a time of 18:50.22.  Jefferson’s Abby Colbert was the fastest freshman girl on the day, finishing fifth with a time of 19:01.66.  Peyton Panger of Capital rounded out the girls’ top ten, finishing eighth in 19:12.26.  With only Brynn Harshbarger graduating this year, next year’s race for the girlsindividual title should be a challenging and exciting event! 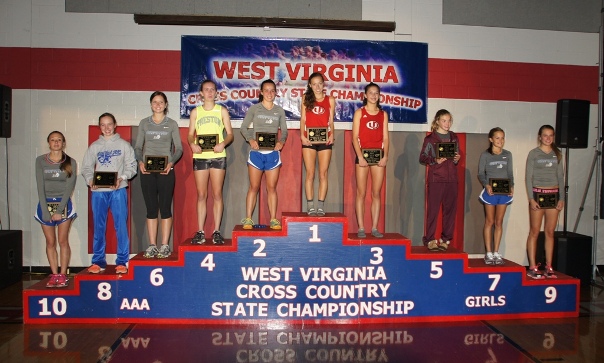 In the boys’ championship race, it was Cabell Midland strength and depth that carried the day.  With three runners in the top ten and 5 in the top 15, Cabell Midland easily outpaced second place University 37 points to 75.  As expected, senior Jacob Burcham led the way for Cabell Midland.   Burcham sprinted out to an early lead and never looked back, leading wire to wire to win in a new course and State Championship record time of 14:58.04.  With this win, Burcham has established himself as the best boys’ Cross-Country runner in State history.

Nevertheless, Burcham did not win the team championship on his own as he was backed by an excellent team.  Cabell Midland set a new average team time state record of 16:06.  Avery Campbell broke the 16 minute mark with a 15:57.28 to seize third place.  Joining Campbell and Burcham in the top ten was Mason Dino.  Dino’s time of 16:18.98 was good for tenth on the day.  Freshman Andrew Short (14th; 16:32.52) and Brian Lawhon (15th; 16:36.23) each finished in the top 15 to round out Cabell Midland’s impressive performance. 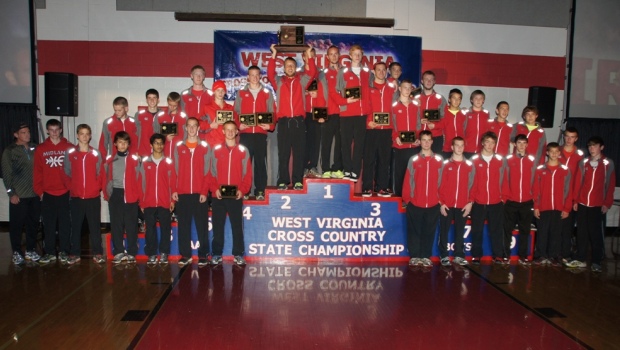 The University boys’ ranked 3rd in some rankings coming into the day but pulled off the upset over defending champion Jefferson.  Andy Paladino led the way for University with an eighth place finish in 16:14.24.  Paladino’s teammates came through with strong performances to secure their place on the podium.  Tristan Harvey (13th; 16:29.63) and freshman Seth Edwards (14th; 16:31) ran great races as each placed in the top fifteen.  They were supported by Alex Minor (23rd; 16:49.72) and Reed Phares (33rd; 17:01.66) as University scored their well-earned second place finish.  University finished with a strong and secure 75 points and a place on the podium.

George Washington junior Matt Brafford ran a terrific race to finish second in the Championship.  His time of 15:42.10 would have placed him first in 2011.  Following Brafford and also earning All-State honors were Preston’s Brody Born (5th; 16:01.83), Oak Hill’s Wes Stowers (6th; 16:09.49), Greenbrier East’s Levi Snedegar  (16:10.89) and Huntington’s Jack McGee (16:18.42).   Of this year’s All-State performers, Brafford, Milliron, Snedegar, and Paladino are all juniors and will challenge for the individual champion title next year.  They will challenged by a wealth of talented freshmen, sophomores and juniors finishing in the top 25. 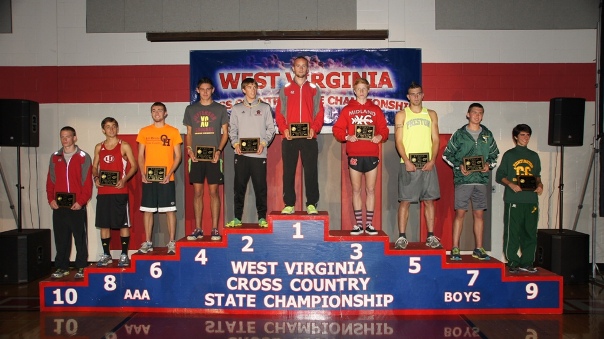 Overall, both the girls’ and boys’ races were run at an incredible pace.  This was true not only amongst the highest finishers but extended deep into each race, especially on the boys’ side.   Last year the race was run under very similar conditions, but results were much different.  Jacob Burcham’s winning time last year would have been good for only third this year.  The All-State/Top Ten cut off last year was 16:38.62.  That would have been good for only 20th this year.  Sub 17 minute times went eleven deep last year; this year they went 31 deep!

Congratulations to the Morgantown girls and Cabell Midland boys and record setting individual champions Jacob Burcham and Amelia Paladino for their 2012 West Virginia AAA Cross Country Championship victories.  And while they very much deserve their congratulations, every runner who competed should be proud of their accomplishments.  It takes incredible discipline and dedication to compete at this level.  Well done to all!