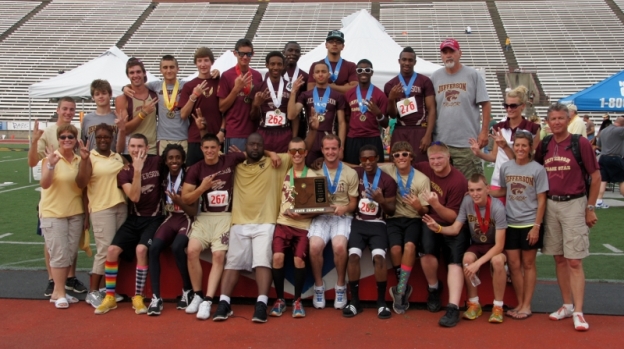 Using contributions from across their roster, the Jefferson High School boys team earned their third straight West Virginia AAA Track & Field title on Saturday at Laidley Field in Charleston.  Jefferson racked up an impressive 41 point victory over rival Cabell Midland, their largest margin of victory in this string of titles.  After finishing tied with Cabell Midland at the end of Day 1, Jefferson’s balanced team scored significant points in the sprints, distance events, hurdles and relays to pull away from the field.  Jefferson’s 41 point victory is the highest since Cabell Midland’s 42 point victory over Preston in 2005. 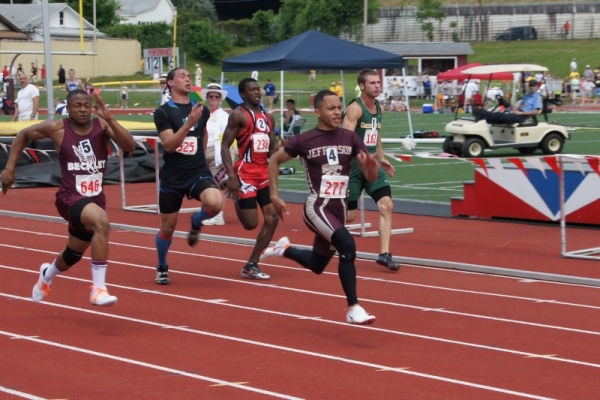 The Cougars were led by Dante’ Price’s 25 points, earning victories in the 100 M and 200 M Dash and running the anchor leg in Jefferson’s victories in the 4 X 100 M Relay and 4 X 200 M Relay.  Pushed by Woodrow Wilson’s outstanding sprinters, Jefferson’s team of Price, Tyler Lambert, Ashton Lai-Fang and Rynal Newman set a new State Meet record with a time of 42.20 seconds, eclipsing the old mark by nearly half a second. 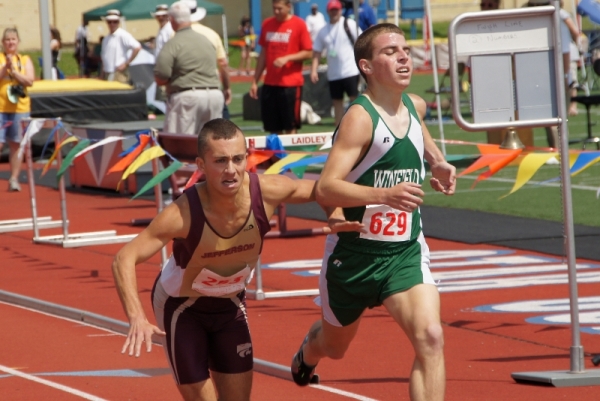 Eric Graf chipped in with another twenty points competing in the distance events.  Graf finished second in the 1600 M and 3200 M runs to Cabell Midland’s stellar Jacob Burcham.  Burcham won the 800, 1600 and 3200 M runs, including meet records in the 800 and 3200.  The 1600 M featured Graf diving at the finish line to just nip Winfield’s Joe Kirtner for the silver.  Graf’s 4:17.73 was a new personal record.  Ryan Graf and Andrew Milliron crossed the finish in new personal record times of 4:21.90 and 4:22.33 respectively to take fourth and fifth and virtually eliminate Cabell Midland’s chances at the title.  Graf also contributed a fifth place finish in the 800 M run and, with Andrew Milliron, Sam Munnis and Ryan Graf a third place in the 4 X 800 M relay.

The Jefferson Shuttle Hurdle Relay team of Ashton Hyler, Lane Simpson, Curtis Chiswell and Warren Gray came through to win with a time of 56.80 beating second place Martinsburg by 1.2 seconds.  Simpson and Hyler contributed third place finishes in the 110 M Hurdles and 300 M Hurdles.  Both the 110 M Hurdles and 300 M Hurdles were won by Cam Viney of Elkins.  Hyler also contributed to the first place finish in the 4X200 M Relay and a third place finish in the 4 X 400 M Relay with teammates Warren Goode, Ashton Lai-Fang, and Leon Waldron.  Martinsburg took first, just edging out Hedgesville in the 4 X 400 thanks to a gutsy final 400 by Nick Bauer.

In the end, however, Jefferson had too much strength across and deep into its roster for the rest of the field to overcome.  Congratulations to Jefferson High School and congratulations to all the competitors for a great meet, great sportsmanship and a job well done!