It was not without some controversy but at the end of the day, the Washington girls Track & Field team seized the Potomac Valley Conference AAA Championship title on Saturday at Jefferson High School in Shenandoah Junction, WV.  Several hotly contested events, most particularly the 200 M Dash, led to scrutiny of the final results with Washington ultimately prevailing over second place Martinsburg by the thin margin of eleven points, 140 to 129.  The young and improving Jefferson girls’ team took third with 111 points, their best showing of the year, while Hedgesville (68.5 points) and Musselman (53.5) took fourth and fifth respectively. 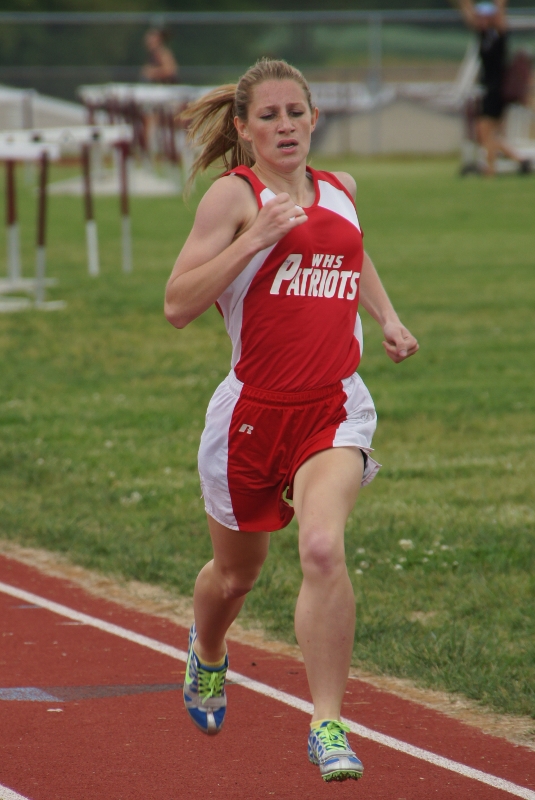 Nikki Ashbaugh shows her power in the 800 - Rollie Jacobs Photo

Washington used the strength of victories in six events in multiple disciplines to power their way to the victory.  In the most closely contested event of the day, Washington’s Devyn Hosby just nipped teammate Rhonda Rogombe and Martinsburg’s Jasmyn Hosby for the win.  Devyn Hosby crossed the line in 25.79 seconds with Rogombe just barely beating Jasmyn Hosby for second place, 25.91 to 25.93.  All three athletes thought they may have won but in the end it was Washington’s Hosby who was awarded the crown.  Washington also gained victories from Nikki Ashbaugh in the 800 M Run as she led from nearly start to finish with a time of 2:25.57.  Jefferson’s Maria Russo (2:29.17) ran a gutsy race, sprinting past Washington’ Destiny Harrison in the final 50 meters to surprise for second place.   Vivian Ruiz contributed to Washington’s winning ways with a time of 12:11.13 to win the 3200 M Run over Hedgesville’s Fallin Stone (12:15.99) and Musselman’s Heather Jenkins (12:54.69).   Washington’s Ashley Warner came just short of cracking the 50 second mark in winning the 300 M Hurdles for Washington with a time of 50.06.  She was followed across the line by Martinsburg’s Cameron Lucas (51.91) and Washington teammate Mya Linden (53.05).  Rhonda Rogombe continued her outstanding performance in the High Jump by taking the victory with a leap of 5’06”.  Jefferson’s Ahry Green and Kenya Price followed in second and third after each clearing 4’10”.

Martinsburg’s stellar sprinter Mykera Days took the 100 M Dash final with a time of 12.12.  The Hosby cousins finished in second and third separated by only .01 seconds with Martinsburg’s Jasmyn Hosby (12.25) just nipping Washington Devyn Hosby (12.26) at the line.  Days and Hosby later contributed to Martinsburg’s victory in the 4 X 100 joining Kala Ames and Breayun Days to post the winning time of 50.90.  In that race, Jasmyn Hosby overtook Jefferson’s Kaitlyn Clark in the last 40 meters to secure the win.  Jefferson ran a great race but had to settle for second with Monique Canino, Aaliyah Rice and Desiree McCarroll joining Clark to post a time of 51.40.

Jasmyn Hosby added to her winning ways by taking the 400 M Dash title for Martinsburg with a time of 58.38, outdistancing Washington Rhonda Rogombe (1:00.54) by over two seconds.  Washington’s Nikki Ashbaugh chipped in with a 1:01.77 to just barely take third over teammate Devyn Hosby (1:01.78).  Martinsburg’s throwers also came up strong with Jaida Walker winning the Shot Put with a heave of 37’07”.  Hedgesville’s Victoria Reid was just behind with a throw of 37’04”.  Martinsburg’s Ashauna Calder contributed to the cause with a 33’06” result, good for third place. 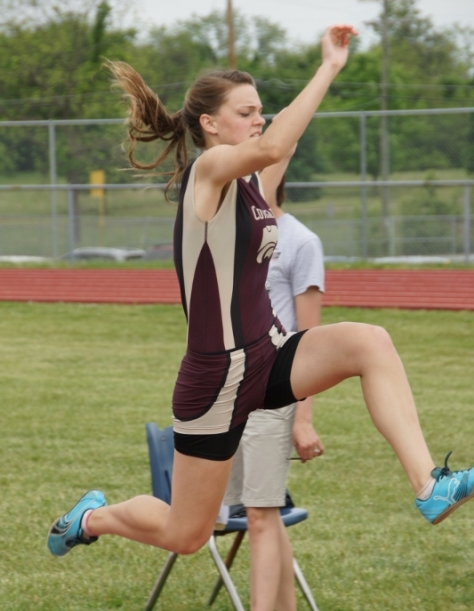 The rising Jefferson team also had some fine moments in the Championships.  Allison Thomas raced to a full one second victory in the 100 M Hurdles with a time of 16.16.  Martinsburg Cameron Lucas (17.21) and Jefferson’s Jessica Ries (17.88) rounded out the top three.   Jefferson’s 4 X 200 M Relay team of Bryanna Doughty, Allison Thomas, Kaitlyn Clark Desiree McCarroll also came up big, winning the relay by over three and a half seconds over the Martinsburg sprinters with a time of 1:48.33.  Martinsburg’s Essence Underwood, Alece Peters, Breayun Days and Mykera Days took second (1:51.91) over third place Hedgesville (1:55.60).  Jefferson’s Doughty and Clark had earlier seized victories in the Long Jump and Pole Vault respectively.  Doughty leapt 16’00.5” for the first time for the win followed by Martinsburg’s Kala Ames (15’02.0”) and Jefferson’s Liza Silver (14’10.5”).  In the Pole Vault, Clark was the class of a tough field with a vault of 11’00”.  Washington’s Caysie Irving (10’00”) and Sara Pifer (9’06”) had to settle for second and third. 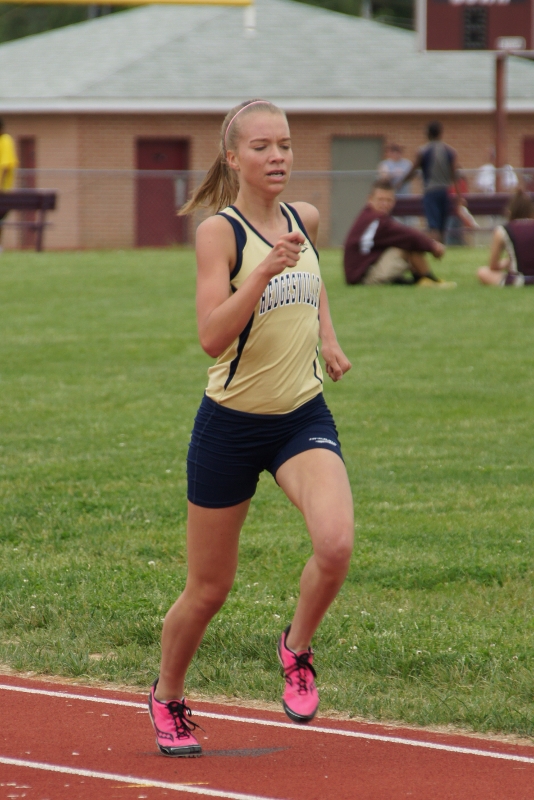 Brittany Pollard races to victory in the 1600 - Rollie Jacobs Photo

Musselman’s sole victory on the day came in the 102.5 Shuttle Hurdle relays with Stephanie Smith, Victoria Grace, Jessica Rannals, and Carleigh Ronevich earning the win with a time of 1:10.67.  The Martinsburg team of Erica Taylor, Kala Ames, Cameron Lucas and Melainie Williams came in less than a tenth of second behind (1:10.75) to take second.  Jefferson’s team was third in 1:12.64.

All of these teams will see each other again Thursday at the Region II AAA Regional Meet at Lewis County High School.  It should be another close and hard fought affair, especially with strong teams from elsewhere in the region added to the mix.  With so many evenly matched athletes in the PVC Conference, the margin for qualifying for States could be razor thin.  It should be very interesting to watch.