The Jefferson boys track team continued their season long dominance of the eastern West Virginia track scene by rolling to an easy victory Saturday at the Potomac Valley Conference Championships.  Running on their home track and without some key participants, Jefferson notched a 175 to 113 victory over second place Martinsburg under deceptively hot and humid conditions throughout the day.  Rounding out the field, Hedgesville was a close third with 107 points followed by Musselman (58.5) and Washington (54.5).

Once again it was Jefferson’s depth and strength across multiple disciplines that ruled the day. Jefferson won seven events and scored points in every event with two and even three scorers in events predominating.    Jefferson had three scorers in the 100 M Dash with Dante Price running a superlative 10.77 to take the victory followed closely by Musselman’s Joshua Ferguson in 10.90 seconds.  Jefferson’s Tyler Lambert (11.18) and Robert Douglas (11.51) followed in third and fourth respectively.   Jefferson also notched three scorers in the 1600 M Run with Eric Graf submitting a personal record 4:19.13 to take the win.  Sam Munnis followed in second 4:30.20 followed by Martinsburg’s Nick Bauer in 4:37.37.  Rhett Zillinger was the third Jefferson scorer finishing in sixth with a time of 4:57.59.   In the 300 M Hurdles, the trio of Ashton Hyler (1st; 39.81, a new PR), Curtis Chiswell (3rd, 42.47) and Nick Ledden (6th; 44.08) all scored.   Connor Flincham of Washington (2nd; 41.81) took second while also posting a new PR.

Other Jefferson victories were notched by Ryan Graf in the 3200 M Run with a new personal record time of 9:40.01 as he dueled teammate Andrew Milliron who set his own personal best time of 9:42.00.  Musselman’s Shane Rigsby was third in 11:06.85.   Jefferson’s team of Ashton Lai-Fang, Tyler Lambert, Robert Douglas and Rynal Newman took the win in the 4 X 100 M Relay just beating Musselman’s Darius Johnson, Malcom Lee, Jean Gonzalez and Joshua Ferguson to the line by .06 seconds.  Hedgesville was third in 45.12.  In the 4 X 800, Jefferson’s Ryan Graf led his teammates, Sam Munnis, Rhett Zillinger and Andrew Milliron to victory in 8:24.62 as he overcame Hedgesville’s Mike Higginbotham over the last 200 M for the win.  Hedgesville’s Joey Gentile, Matt Taylor, Mike Ambul and Higginbotham finished in 8:26.62 for second.  Jefferson’s throwers were not left out of victory lane as Travis Miller launched the shot 45’07” to seal the win.  Martinsburg’s Logan Jenkins (42’06”) took second followed by Musselman’s Thomas Baroody (41’09”) in third. 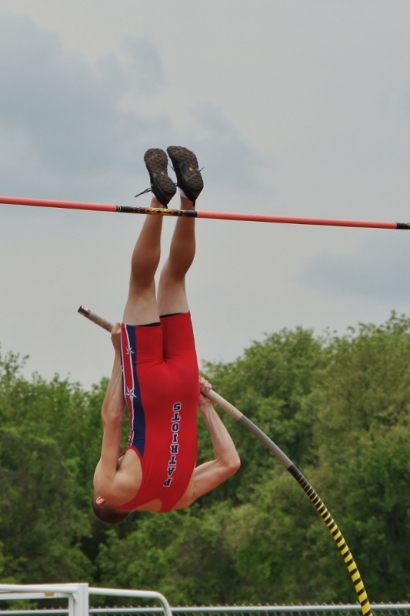 But Jefferson’s were not the only outstanding performances on the day.  Washington’s Martinez Grant soared over one foot beyond his previous PR to 21’03” to easily win the Long Jump.  Jefferson’s Curtis Chiswell, competing in the Long Jump for the first time, jumped 19’10” to share second place with Martinsburg’s B.J. Hunter in third (19’10”).    Martinsburg’s Lamaj Cooper cleared 6’02” to take the PVC High Jump crown.  He was followed by the trio of Hedgesville’s Shawn Fisher, Washington’s Martinez Grant and Jefferson’s Geoffrey Walker who tied for second with a jump of 5’08”.  Washington’s Roland Rush continued his winning ways in the Pole Vault by clearing 13’0” for the win.  Jefferson’s Jimmy Meyer set a new PR with a vault of 12’6” to secure second followed by Hedgesville’s Hunter Weaver in third (12’00”).

Hedgesville took the 4 X 200 Relay (1:32.81) and the 4 X 400 M Relay (3:31.20) with Aaron Lloyd anchoring both teams.  Musselman finished just behind Hedgesville in 1:32.90 to take second in the 4 X 200.  In that race, third place Jefferson had a clear lead but anchorman Dante Price pulled up in the last 50 meters due to a cramp in his calf and walked the last few meters to the finish.  This bears watching as Regionals and States are now upon us and Price is expected to win or score in multiple events for Jefferson.  Martinsburg finished second in the 4 X 400. 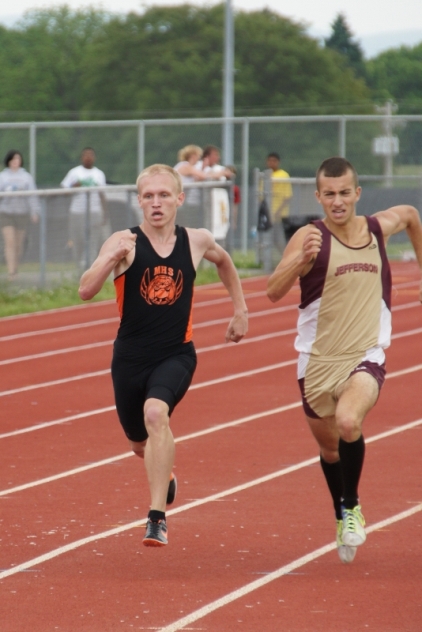 Overall it was a day of success for athletes from all the competing teams.  Nevertheless, with many new personal and season bests put up during the meet, Jefferson seems to be peaking at the right time.  Jefferson’s season-long goal remains securing their third straight West Virginia AAA Track & Field Championship.  While it will not go unchallenged at Laidley Field by the other great teams in West Virginia, Jefferson’s goal may just come to fruition.