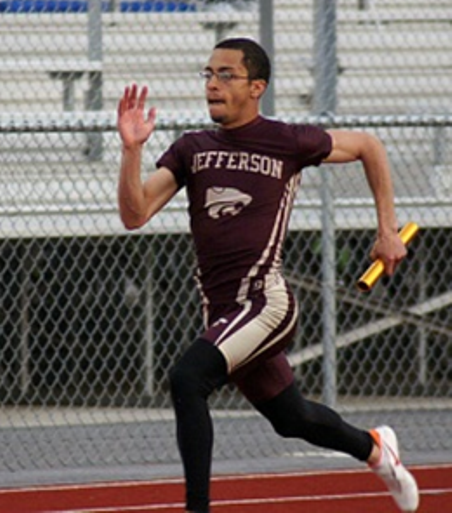 Last weekend, Jefferson High School sprinter Dante’ Price capped off a successful winter training season by taking second in the New Balance Indoor Nationals Emerging Elite 60 meter dash at The Armory in NYC.   In competing at New Balance, Price hoped to compare himself to the best, “I was there to get the experience of being in a meet like that…competing with US #1’s, 2’s and 3’s.”.  Learning from these other elite runners was also part of the  plan, “I wanted to see what they were doing and take the opportunity to learn from them so I can make myself even better”.   As part of that experience, Price competed in the Championship series races in addition to the Emerging Elite races.  In doing so he qualified for the 60 meter Championship semi-finals along with some of the nation’s best sprinters.  While his time in the semifinals fell short this time, had he been able to replicate the 6.94 time he had posted in the Emerging Elite race, Price would have been a Championship finalist.  In spite of missing out his goal of a top six finish in the Championship finals, Price felt very good about his performance, “I’m happy with my results…I PR’ed (set a new personal record) and took second in the Emerging Elite…really just being there, you can’t really lose”.

With the outdoor track season about to open, Price is looking forward to a great season for himself and his team.  He’s focused on what needs to be done to be successful, “the first thing is to get strong and really, really technically correct“.  While he certainly has some personal goals, team success is also on his mind, “the biggest thing is for our team to win that third straight team championship”.  Those personal goals are also ambitious, starting with setting a state record or two, “Hopefully I have a shot at the state 100 meter record…10.59” as well as setting the 4X100 record with his teammates “I feel like we can get ahold of that one”.  And while he isn’t focused on a record in the 200 meter dash “that may be a little further off” he’ll take it if it comes and hopes to repeat as West Virginia State Champion and contribute to a Jefferson 4X200 relay win.

Following the season, Price hopes to compete once again at the New Balance Outdoor Nationals where he is the defending 200 Meter dash Emerging Elite champion.  If he is able to get his 100 meter time below 10.6 seconds during the season, then the USA Junior Olympics may be a possibility.

Looking forward, Price his weighing his options on a college sprinting career.  While track will certainly be part of his future, he is sorting out what’s including whether to focus primarily on track or to focus on getting a great education while also competing hard on the track.  To that end, he’s already received initial e-mails from several schools, including multiple elite academic universities.

Whatever happens this year or beyond, Price has already made his mark on the West Virginia high school track scene.  With a good head on his shoulders and continued dedication to improving his craft, no doubt there will be much more to come.

Note:  Price kicks off his outdoor season with his Jefferson teammates by hosting the Jim Taylor Relays.  The meet will be held at Jefferson High School in Shenandoah Junction, WV next Saturday, March 24th  starting at 9:00 AM.