Running without two of their regular varsity starters, the Jefferson boys demonstrated their depth today by dominating the field at the 34th Annual Frank Keyser Invitational in Boonsboro, MD. Eric Graf led the way with a sterling 15:15 win across a rainy, cold and soggy course. Including Graf, Jefferson placed three of its runners in the top five  to secure the win.  Austin Hayslett of Urbana finished strong, holding off Jefferson's charging Ryan Graf to nip him by .02 seconds for second place in 15:25.  Evan McCarthy of Woodgrove finished in a strong fourth position in 15:43 followed closely by Sam Munnis of Jefferson in 15:44.  The remaining Jefferson runners scoring included Zach Wiberg in 16:49, and Jimmy Ross in 16:59.  With their strong finishes, Jefferson easily outpaced second place Richard Montgomery HS by a score of 63 to 92.  Other top West Virginia runners in the Boys large school varsity race included Musselman runners RJ Stephens (16:44), Shane Rigsby (17:02) and Denys Andreshenko (17:08).  Musselman finished 11th overall in the field.

The Jefferson boys also won the large school Junior Varsity race paced by first place Andrew Milliron's stellar 15:49 and second place Jimmy Meyer's 17:19.  Jefferson placed four runners in the top 15 and six in the top 20 to earn the JV large school title over Richard Montgomery by a score of 50 to 66. In the girls' races,  a sweep was also the order of the day, as Liberty secured the large school Varsity and JV titles.  In the Varsity race, Liberty relied on its depth to squeek past second place Woodgrove 99 to 101.  Freshman Emily Mulhern of Urbana looked strong and led most of the way to capture the individual title in a fast 18:08 followed by second place Abbey Daley of Clarksburg (MD) in 18:17.  Casey Sullivan was Libery's top runner, finishing ninth and posting a time of 18:56.  The West Virginia runners in the race were led by Musselman's Heather Jenkins with a strong 19:04 finish and Maddy Trucks (20:40).  Molly Briggs led Jefferson with a time of 20:48 followed by Emma Lindberg in 21:01. 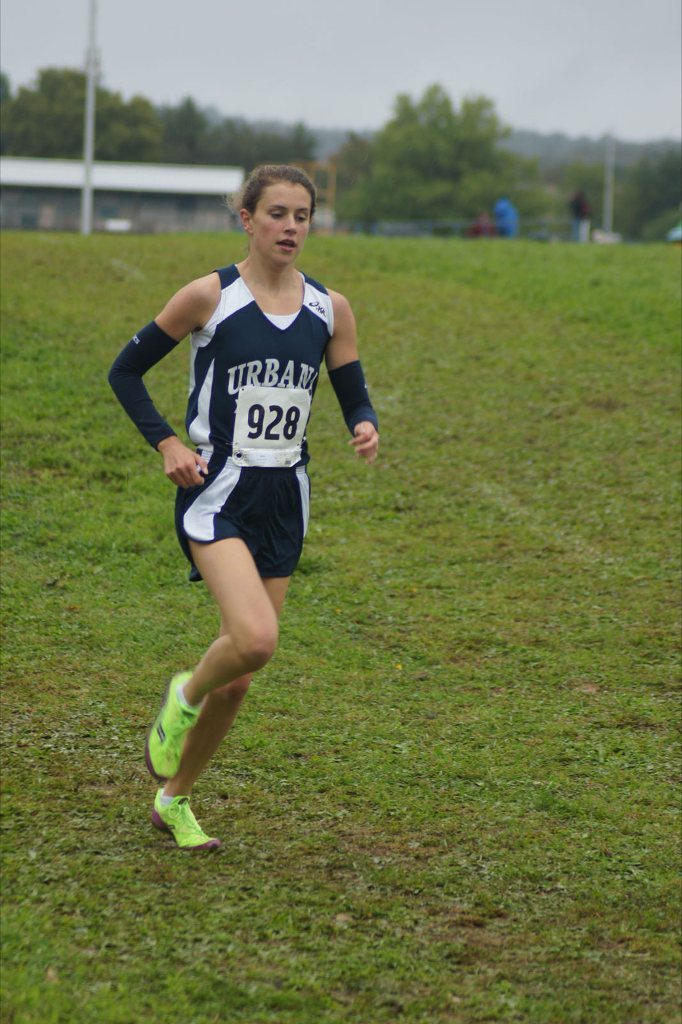 The girls' large school JV race was won by Bryanna Vacca of Westminster (MD) in 20:58.  As in the varsity race, Liberty slipped past Woodgrove 59 to 64 to secure the team title.

In the girls' small school Varsity race, Greencastle Antrim showed off its young talent by placing three freshman girls in the top 13 overall to capture the team victory over Oakdale 56-71.  Caroline Schemel impressed with a stellar 18:11 posting on the soggy Boonsboro HS grounds.  She was followed by Boonsboro's Sarah Zielinski's 18:28 and Greencastle Antrim's next freshman finisher, Shelby Stouffer (18:52).  Alana Egbert was Greencastle's third finisher and third freshman finishing 13th with a time of 20:13.  Destiny Harrison of Washington was the top West Virginia runner, placing 9th with a time of 19:35.

Boonsboro's Kortney Cunningham captured the girls small school JV title, leading her team to victory with a time of 20:45 followed by Bishop Ireton's Aubrey Gartlan in 20:56.  Boonsboro edged out the Bishop Ireton 63 to 65 to capture the team crown.