The Jefferson boys cross country team finished fifth Saturday against an extremely strong field of 65 teams and over 2500 runners from Maryland, Virginia and West Virginia in the nationally recognized Oatlands Invitational Cross-Country meet in Leesburg, VA.

Competing against nationally ranked teams and runners the boy’s team took fifth including placing three runners in the top 25 in the prestigious Varsity A race. Racing on a tough and soggy Oatlands Plantation course featuring two stream crossing and a steep pitch titled "The Wall", Jefferson was led by Eric Graf who completed the 5 kilometer (3.1 mile) course in a blazing 15:51 minutes to take fourth. Ryan Graf came in shortly thereafter placing 21st in 16:21, followed closely by Andrew Milliron in 16:25. Contributing to the team's top five scoring were Sam Munnis in 17:11 and Jackson Jacobs in 18:01 followed by Nick Ledden in 18:09 and Jimmy Ross in 18:34.

Sam Munnis at the Start

Overall the race was won by Sean McGorty of Chantilly HS in 15:30, followed by national #4 runner Ahmed Bile of Annandale in 15:48, and Logan Miller of Chantilly in 15:49. Albemarle High School of Charlottesville, Virginia took the team title.

In the girls races, Hampshire represented West Virginia against a strong field in the girls Varsity A race. Led by Rachel Lipps who finished 26th with a time of 19:26, the Hampshire girls finished 26th in the team competition. Other key contributors for Hampshire included Sarah Burkett (20:12; 42nd), and Ashley Martin (20:54; 85th).

The Jefferson Girls varsity continued their recent improvement and finished 26th in the girls Varsity B race. They were led by Molly Briggs with a time of 22:01, good for 66th overall. Desiree McCarroll followed closely finishing in 22:25 for 94th place and Emma Lindberg in 134th with a time of 22:52. 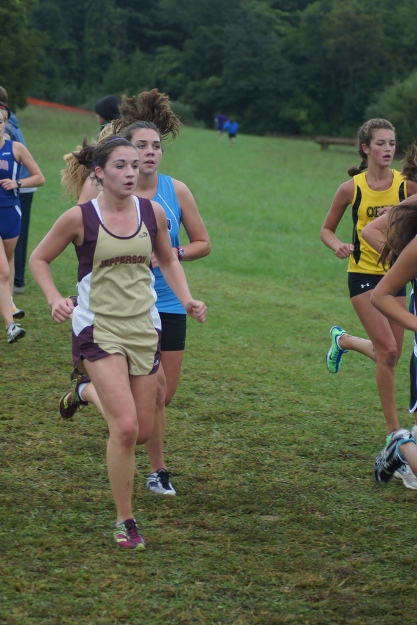 In other races, Zac Wiberg of Jefferson continued to impress placing in 4th place overall in the JV Underclassmen Boys race in 18:00 minutes.