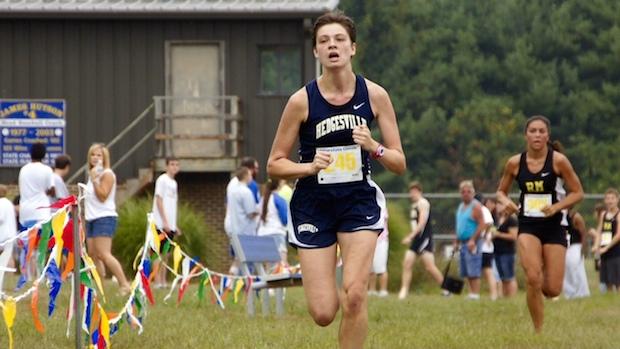 Hedgesville junior Jessie Hogbin won the Interstate Classic on Saturday in Clear Spring, Maryland as she was able to pull away from Richard Montgomery (MD) senior Sophie El-Masry at the end of the race for a 19:40 victory on the 3 mile course. Hogbin, who ran track PR's of 5:12 for 1600 and 11:17 for 3200 meters this past spring, has started off 2015 cross country season strong with a runner-up finish at the Cougar Classic on August 26th before her victory in Maryland this past weekend.

Preston sophomore Tori Carr was the next highest finisher from West Virginia in the girls race with a time of 20:57 for 10th place among the large schools division. The Preston girls finished 4th in the team standings behind Carr as their top scorer with 83 points.

Three boys from West Virginia were top 15 finishers in the large schools division breakdown with Hedgesville's Daniel Beavers (6th, 17:08), Musselman's Josh Leake (11th, 17:26) and Samuel Garrett (14th, 17:37). The Musselman boys finished fifth overall with a team score of 136 points, while Preston boys were 25 points behind them in sixth place in the large schools division.