Last Saturday, Millie Paladino’s fantastic journey that was her 2014 track season at University High School wrapped up more than 2,000 miles from where it started. Whether it was on an indoor oval in Ohio or at a high school stadium a few miles from Puget Sound, Paladino showed she was one of the nation’s best this year.

In the following Q-and-A, the soon-to-be Mountaineer talks about her final race as a high schooler and other highlights from a track season that was loaded with records and national-class performances.

Q: In Saturday’s race, you were on the outside early on and spent some time running in lanes 2 and 3. Was that part of a pre-race plan to stay out of trouble or is that just how the race and pack developed?

A: I didn't necessarily have a plan going into the race as to where I should run most of it. I think it's important to be able to think on your toes when you are in race situations that are really tightly packed like Saturday's race. I'm really used to running alone in the front of the pack, as you know, so I think I ran out in those lanes to distance myself so I could focus on my own race and not everyone's around me.

Q: On the third lap, you were as far back as sixth or seventh as the pack of nine started to thin out. Tell us about the move you made to be the fastest closer in Saturday’s race and claim fourth.

A: Sometimes when you race it's not so much as thinking about what you are doing and rather just doing it. So with that, I don't really quite remember making the move, I just remember wanting to bring it home.

Q: Being invited to run as one of the nation’s best in a showcase meet such as the Brooks PR Invitational is a great honor. What was your reaction when you received your invitation to head to Seattle?
A: I will always remember the night I got my invitation to the PR Invitational. It was the night of a track meet that was really far away from home and was freezing and rainy. I was miserable and exhausted as we loaded the bus at 11:30 p.m. to make our two-hour trip home, but as I passed my coach he handed me the wooden box with the puzzle in it. I was so excited I did the puzzle in the dim lighting on one of the school bus seats, and all of my teammates watched as the message became clear: "The Brooks PR Invitational is on in Seattle, and we want you there!" It's one of those things you don't forget anytime soon.
Q: Way back on Feb. 15, you ran 4:46.41 in the 1,600 at the SPIRE HS Showcase in Ohio. And Saturday (June 21), you clocked 4:46.69 for the mile. Are you surprised at how long you were able to compete at an incredibly high level?
A: To say I've been surprised with how my past running year has gone would probably be an understatement. I have been battling some foot pain ever since the state track meet in May which kept me from doing a lot of post-season workouts, so I couldn't be happier with that 4:46 on Saturday. I trained so hard throughout the whole year, and those times I ran are really just the benefits of all the hard work and dedication, not just from me but also from my coaches, that went into my training.
Q: You are West Virginia’s fastest all time in the 800, 1,600 and 3,200 runs. Was this one of your goals at the beginning of the season and are you 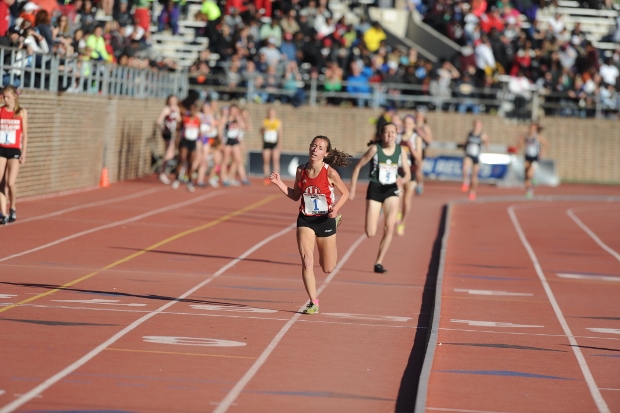 surprised you are No. 1 in all three races?
A: I still have to pinch myself when I think about holding all of those records. Of course someone is going to break all of them at some point, but such is life. I never went out and set a goal to be the fastest girl in WV ever. The only goal I set is to be the best that I could possibly be. This year I got to see glimpses of my full potential and that meant being the best that West Virginia has seen, yet. Of course, it's nice to have my name next to those records, but the significance lies in the fact that I was able to push my body and mind to set them.
Q: Your senior year included some incredible events and experiences - San Diego, Franklin Field and Seattle to name a few. What was the most memorable moment for you during the 2013 cross country and 2014 track seasons and why?
A: I have had quite the year and have been blessed with the experience to travel the country and meet some amazing people, so choosing the most memorable is a difficult task. I think, however, one of my all-time favorite running memories would have to be when I ran 10 flat. My coach had told me earlier in the day that I was shooting for around 10:10 to 10:15, and I remember thinking to myself "I really don't think I can do that". It was a cool night with almost no wind around 9:30 p.m. when I lined up next to my best friend/running partner, Sarah Wills. I remember feeling so strong and focused, and when I finished the whole stadium was clapping and the guys from our boys team all rushed over to me and started hugging me. That same night, for the first time I was asked for my autograph. The guy's name was James McDougal. I'll always remember that.
Q: Which of your achievements from the 2014 track season are you the most proud?
A: It's hard to say that I'm most proud of one accomplishment because I think it's the summation of all of them that make me the runner I am. One of the biggest was winning the Penn Relays though. That was so important to me because I felt like I was winning something for the state of West Virginia. The fastest runners don't typically come out of this state, so when I won I felt like I was making everyone in West Virginia who believed in me proud. I have the most wonderful support system here, and I loved the fact that I could bring home a victory for them. That principle applies to all of the national meets that I have had the opportunity to run in.
Q: Maybe it was your PR 2:08.49 to wrap up this year’s state meet or the 10:00.42 in the Gazette/Friends of Coal Relays … Select the race and performance that surprised you and why.
A: I am constantly surprising myself with what I've been able to throw down on the track this season. That's not to say that I didn't train to run those times because I certainly did, but it's a different feeling when you actually experience yourself doing it. I think my 4:43 mile at New Balance Indoor Nationals in March may have been one of the most exciting achievements. I remember looking at the clock as I finished and thinking, "Oh, they must have stopped the time when the first person crossed the line!". So later when I found out that was not the case, I was almost in disbelief. It was one of those races that proved I could hang with some of the fastest and hopefully continue my success through college.
Q: After dozens of races and hundreds of miles of training, how long of a summer break will you have before you start training for your freshman year at West Virginia University?
A: I will at least be taking 10 days off. I mentioned above I've been battling with a foot pain, so I think a little rest will do me some good. It's the first time I'm taking significant time off since last summer, so I'm actually kind of excited. I'm not exactly sure when I start training with the WVU team. The first workout will be sometime in August, so I've got nothing but exciting things waiting for me.
Run Junkie HS: Shen Girls Dance to US #2 & DJ Principe Co-Hosts! Jan 24, 2017
Amelia Paladino (WV) - 11th Place Foot Locker Nationals Dec 14, 2013
Amelia Paladino - 10th Place, Seeded Girls Foot Locker South Regional Nov 24, 2012
Tweets by