West Virginia crowned its cross country champions Saturday in Ona, with a freshman and seniors taking individual crowns and some familiar names leading the team races. 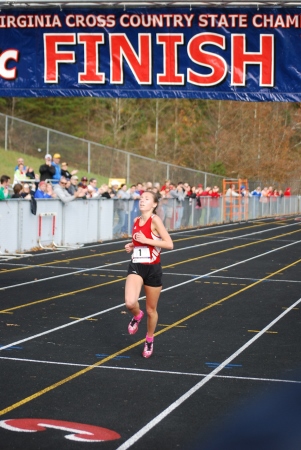 In the opening race of the day, Amelia Paladino of University played catch me if you can with the girls’ field. The senior led from start to finish, successfully defending her title in 17:55.84. Although her time was slightly slower than a year ago, it was the fastest of the day for the girls.

Second went to Abby Colbert of Jefferson.  The sophomore worked her way up to the No. 2 spot just past the mile and remained there, clocking 18:22.53. The rest of the top five included Peyton Panger of Capital in 18:58.10, Victoria Cooke of Morgantown in 18:59.82 and Abbey Harrison of University in 19:00.98.

In the team competition, Cooke led the Mohigans to another AAA crown, their third consecutive and seventh since 2002. Morgantown had its five scoring runners in the top 11 and won with 40 points, while runner-up Hurricane was second with 86 and University claimed third with 96.

The most exciting moment of the day came after the closest margin of victory as Philip Barbour won another AA-A girls’ title, having to go to a tiebreaker to edge past Charleston Catholic.

Melisaa Kaiser’s squad finished with 91 points, as did Charleston Catholic. The first-place trophy went to Philip Barbour for the fourth consecutive year as its sixth runner finished well ahead of the runner-ups.

Seniors Marissa Long and Allison Villers led the winners in 17th and 18th overall (11th and 12th in the team competition). The Colts featured a 1:08 gap between their first and fifth runners, while Charleston Catholic was led by Hannah Gacek in 13th overall and eighth in the team scoring and had a 1:17 1-5 split.

Berkeley Springs was a close third with 96. 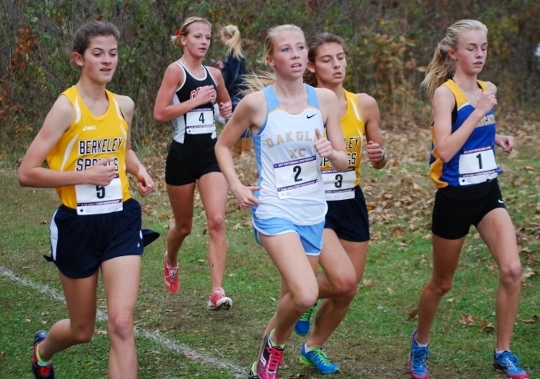 Individually, freshman Alicia Parsons of Grafton broke away from a lead pack of five after the opening mile and claimed the title, covering the 3.1 miles in 19:03.23. The winner was one of three freshmen in the top eight overall.

Kelsey Chambers of Oak Glen stayed the closest and was second, running 19:14.26, while Kinsey Reed of Berkeley Springs claimed third in 19:20.24. Another Grafton freshman – Montana Garrett – was fourth in 19:54.55, and Hailey Miller of Ravenswood crossed the line fifth in 20:06.18.

In the boys’ race, Bridgeport swept the top honors as Abe Merinar pulled away from the field on the upper section of the course and won in 16:20.05. Classmate and teammate Matt Dearth was fourth in 16:30.39 as the Indians were the class of the team competition, finishing with 45 points.

Philip Barbour picked up another AA-A trophy, claiming the runner-up team spot with 104, while defending champion Fairmont Senior was third with 131.

Brettley Harris of Webster County was second overall, running 16:27.72, while sophomore Hayden Harrison of Buffalo was third in 16:28.60 and early leader Johnny Hogue of Ritchie County placed fifth in 16:44.67.