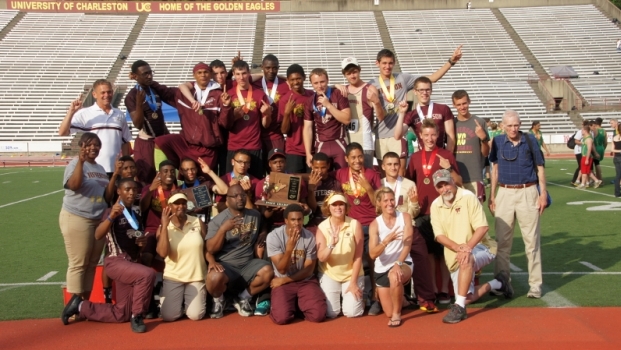 The Jefferson boys’ team came into the West Virginia High School Track & Field Championships with high goals and high expectations.  They did not disappoint.   Jefferson brought home their fourth straight AAA championship on Saturday, defeating their game second place rival Cabell Midland 121 to 78.  As in past years, Jefferson relied on depth spread across multiple disciplines to secure the victory. 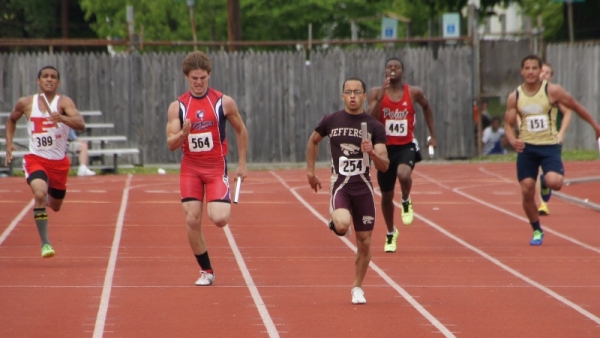 Joining Price and Gray in scoring victories were Jefferson’s two superb jumpers.  Jordan Hardiman cleared 6’8” in the High Jump to notch the win while Martinez Grant soared 20’6 1/2” in the Long Jump to earn his Gold Medal.

In the Distance events, Cabell Midland’s outstanding runner Jacob Burcham was expected to sweep.  Burcham led his team to victory in the 4x800 in a new State Meet Record time of 7:49.84 followed by a fast Jefferson squad who outpaced rival Hedgesville by 1.5 seconds 8:05.59 to 8:07.09.  In the 3200 later that evening, Burcham raced away from George Washington’s Matthew Brafford (9:21.71) to win in 9:08.34.  Jefferson’s Ryan Graf and Andrew Milliron scored significant points in finishing in the next two spots in 9:26.50 and 9:28.05 respectively.  Running on a bad ankle, Cabell Midland’s Avery Campbell finished fifth in giving Cabell the lead over Jefferson 32 points to 29 at the close of the first day.

The turning point may have come in the first distance event of day two in the 1600.  As expected, it was Jacob Burcham taking the field out strong.  In spite of the fast pace, Jefferson’s Milliron stayed close to Burcham and teammate Graf raced ahead of Brafford to finish 2-3 in the race.  With no other Cabell Midland runners able to score, Hardiman’s High Jump victory being sealed and multiple sprint events ahead, Jefferson pulled ahead and did not look back.  In the end, Jefferson posted a 43 point victory over an excellent Cabell Midland squad.  Parkersburg (43 points), Hedgesville (35) and Greenbrier East (26) rounded out the top five teams. 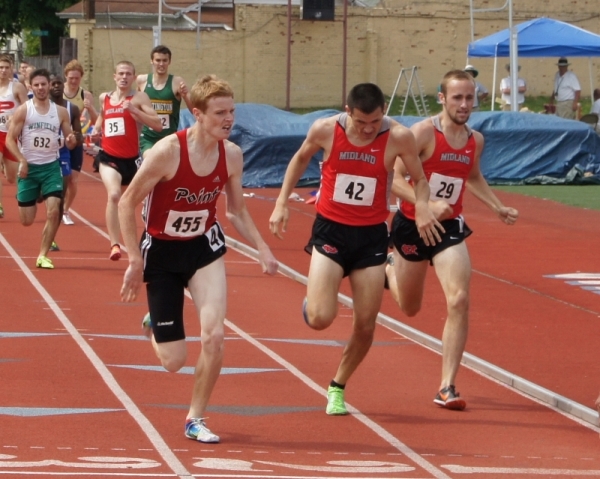 Overall highlights on the day included:

In the end, a deep and diversely talented Jefferson squad just had too much speed and strength for the talented Cabell Midland team and the rest of the state to overcome.  In winning their fourth straight title, Jefferson became the first team to do so since Cabell Midland did so from 1996-1999.  No doubt, Jefferson will be fired up to go for “one for the thumb”, a fifth straight title, next year.  If they do so, they will be the first team to do so since the division into classification in 1962.

In any case, the West Virginia high school track and field landscape will be very different next year with the graduation of two athletes who have been dominant in their high school careers; Dante’ Price and Jacob Burcham.   Who will step up to replace them?  Will Jefferson be able to replace the great talent graduating this year and have enough stay ahead of the rest of the state to grab a fifth straight title?  I’m looking forward to the next 12 months to find out.