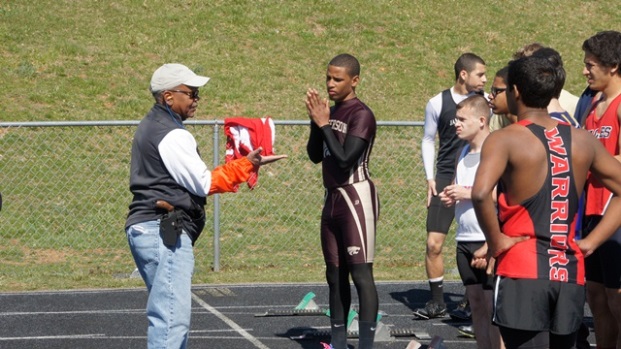 On a beautiful spring day in Lexington, VA, ten teams from Virginia and West Virginia gathered to compete at the 1st Annual Mike Brown Invitational at Rockbridge County High School.  The meet was coordinated by Rockbridge coach Jennifer Showalter as way to provide competition for regional athletes and honor her former coach, Mike Brown.  Coach Brown mentored and coached young athletes in the Lexington area for over 35 years and continues to mentor athletes, coaches and former athletes since his retirement.  He also continues to contribute to the local track scene, serving as an official and starter at local track and field events.  On Saturday, Coach Brown was again in action as the starter of the meet named in his honor. 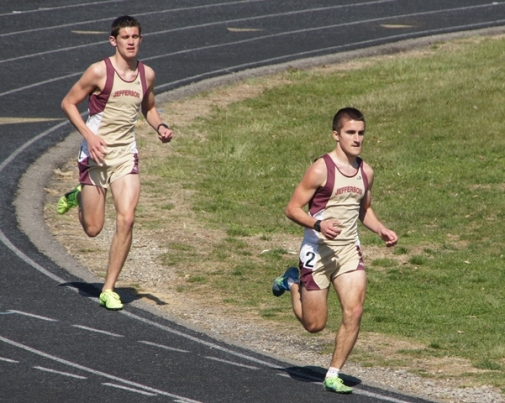 It was a long trip for Jefferson as they gathered at 4:30 AM in Shenandoah Junction, WV for the trip to Rockbridge County High School but they were able to shake off the cobwebs and focus on their performance as the day progressed.  As expected, the Jefferson boys received key contributions from sprinter Dante’ Price and distance specialist Ryan Graf.  Price seized the 100M and 200M Dash titles in 10.88 and 22.50 seconds respectively while Graf pitched in with a victory in the 3200M run in 9:42.02 followed by teammate Andrew Milliron in 9:50.6.  In addition to Price and Graf, Jefferson notched an outstanding performance from hurdler Warren Gray.  Gray won the 110M Hurdles in 15.85 and followed up with a convincing 300M Hurdles victory (41.22).   Additional Jefferson victories were earned by long jumper Martinez Grant (19’6.00), and Warren Goode in the 400M Dash (52.36).

Overall, the Jefferson boys earned the victory with 162.5 points followed by Sherando (86) with Alleghany (75), Liberty (70) and Parry McCluer (38) rounding out the top five. 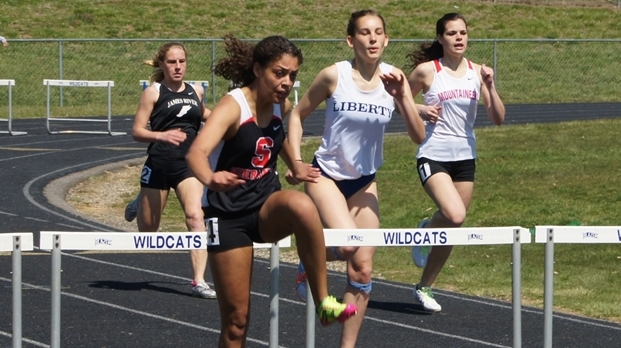 Perhaps the most impressive performance of the day was posted by Covington’s Leteisha Clarke.  Clarke leapt to victory by a considerable margin in all three jump events winning the Long Jump (14’8”), High Jump (5’0”) and Triple Jump (33’0”) over her talented rivals.

Overall it was a great day to honor a significant contributor to youth track and field in Virginia.  Here’s hoping the Mike Brown Invitational continues to grow and honor Coach Brown’s many contributions past, present and future.