CHARLESTON - Bethany Drury of St. Albans High School won the girls shot put and discus this past Friday at the BB&T Classic Track & Field Meet that was held at the Laidley Field in Charleston, WV. The meet was hosted by George Washington High School.

Drury, a senior, who specializes in throws, went thirty-seven feet, 3 inches in the Shot Put beating her next competitor by more than three feet.  She had a throw of one hundred twenty-six feet, five inches in the discus, winning by more than 15 feet; that was a new personal record for her. Drury is currently US#67 and WV#1 in the shot put, and she is the WV#1 in the Discus Throw. Her WV#1 toss in the Shot Put of forty-two feet, five inches is more than five feet better than the WV#2. 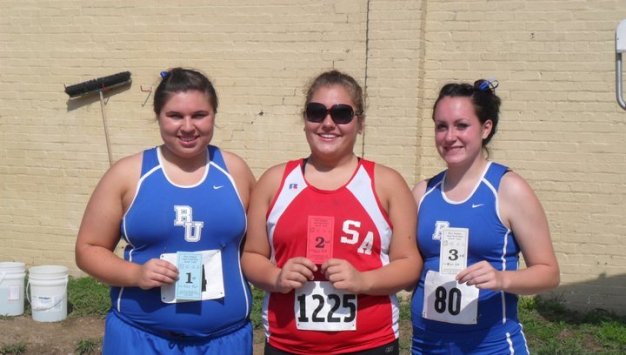 Marietta High School’s Page Grosel medaled in three events, finishing first in the Pole Vault in 10 feet, six inches, third in the 200-meter dash in a season best time of 27.83, and fourth in the Long Jump in a personal record of 15 feet, four inches.

White, a senior, won the shot put by more than one foot with a throw of forty-nine feet, one and a half inches. He got a new personal record in the Discus with a throw of one hundred sixty-five feet, two inches. He is currently ranked WV#1 in both events.

Charleston Catholic’s Keiffer Reed won the Pole Vault in a height of fourteen feet. He is currently ranked WV#2 with Alex Howden of Hurricane High School and Nash Thomas of Preston High School.

In all, the BB&T Classic Track & Field Meet had nine performances that met the national silver standard.

The Winfield High School boys and girls track & field team won the team titles. There were twenty-six teams that competed for the boys and twenty-four for the girls.