Loading
HURRICANE, WV - The Hurricane High School boy's and girl's track and field teams each finished third with a strong showing on April 5th, 2012 at the Teays Physical Therapy Invitational at the Hurricane High School Track. The Redskins had two athletes who had performances that met the national silver standard as Tori Dent took first in the 800-meter run and A.j White took first in the discus.
Sophomore Tori Dent led the girls’ 4 x 800m relay team of Natalie Schwendiman, Baylee Summers, and Emily Schwendiman to a first place finish in 10:27.10, and returned a little while later to capture the 800-meter run in a new PR of 2:19.82, finishing a second ahead of Buckhannon-Upshur’s Emily Godwin. Tori currently has the WV#1 in the 800-meter run. 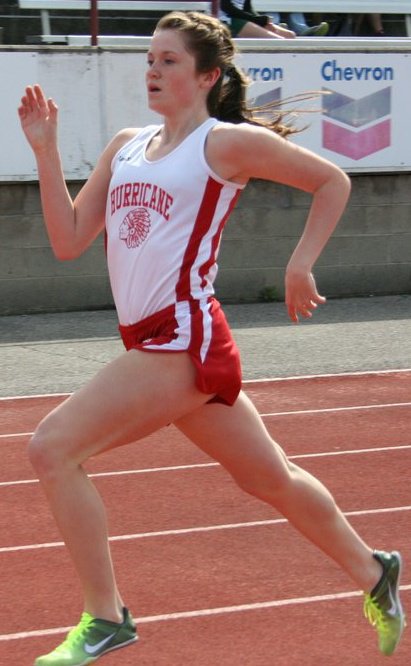 Tori Dent - Photo by Deidra Dent
Dent then returned to the track for the last event of the day with teammates Chloe Barber, Allison Clay, and Jordan Losh to lead the girls’ 4 x 400m relay team, which placed second in a time of 4:20.98.
The Hurricane girls also finished first in four other events. Junior Emily Schwendiman ran a PR in the 1600m in 5:34.17. Freshman Joie Johnston ran a PR in the 3200m in 12:22.80. Senior Chloe Barber won the 300m hurdles in 48.32. She also went 4-8 in the high jump, placing sixth. Rising freshman Lauren London won the pole vault in a vault of 8-06.00. Lauren placed fifth at this past summer’s AAU Junior Olympic Games.
On the boys’ side, Senior A.j White went 51-4 in winning the shot put and went 157-7 in the discus for a double win. He is the current WV#1 in both events. His personal best are 161-8 in the discus and 54-9.25 in the shot, which won him two State Titles at the 2011 WV High School State Track Meet. White has signed with Gardner-Webb University in Boiling Springs, NC.

Aj White - Photo by wvgazette.com
The Hurricane boys finished first in three other events. In the sprints, sophomore Steven Handley ran PR’s of 11.44 in the 100m and 23.35 in the 200m, placing first in both. Senior Alex Howden got a new season best of 13-0 in the pole vault. He also got a new season best of 5-2 in the high jump, while placing seventh.
We continue to see a rival between the Winfield and Hurricane girls’ track teams. Each week it’s a fight for Putnam County supremacy, and it has come down to a few points every time these teams compete!
Tweets by